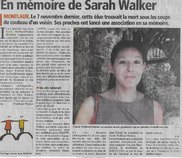 A first article published in L'Indépendant this Tuesday, April 5th, 2016

An article has been published this morning about the creation of the ASWW. A second one will follow around April 20th, where two shows and activities which are offered to the Association in memory of Sarah, will be announced here as well as on the facebook page. And maybe, other surprises ! See you soon ...

It has been almost five months since Sarah tragically died, stabbed by a neighbour in La Place de la Mairie, Montlaur. This murder caused a commotion not only in the village, but in all sectors of the Corbieres

The forty year old had a good reputation, was a municipal councillor and a member of the cultural association l’Abibrus, she was appreciated and involved in the social life of the villages near to Montlaur

Her friends and relatives have founded an association in her memory. The initiative was taken by her husband Mike Walker who will be President of the Association Sarah Walker-Wafflard (ASWW) which was created in February. Her family have chosen to take inspiration for this project from the personal goals that Sarah pursued “solidarity and support” were dear to her, thus the association aims “to help children with a talent, skill or gift, but which their parents are unable to finance”

On 26th April this Association will be officially launched at a public meeting taking place in the foyer of Montlaur from 18.30 hrs

This date has not been chosen at random. It is the birthday of Sarah Waffard-Walker and also the anniversary of her marriage

At the meeting, Mike Walker, who lives permanently in Montlaur will present the aims of the ASWW. Serving on the committee are relatives and friends of the victim, also Antonin Andrieu, the Mayor of Montlaur who is the Honourary Vice President .

A website (www.asww.fr) and a Facebook page have already been opened to give access to members and donators. The association has already a logo, two smiling children attempting to join hands, illustrating Sarah’s ideal of solidarity

People wishing to join the association can contact the Secretary, Corinne Bourdereau on +33 (0) 629 781 093 or through the website or social network.

An interview of the ASWW will be diffused next monday (April 11th) on the radio 100/100 (Find your local frequency on www.centpourcent.com) 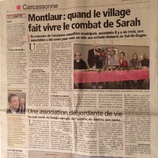 Further to the ASWW inaugural meeting on 26th of April, at the Grand Foyer of Montlaur, a very nice article has been published two days later, on the Independant and Midi Libre, which we warmly want to thank.